The Twin Towers of Catford

The closure of Catford Stadium robbed us of the irony of a dog track in cat town. Sadly, by 2003, the bottom had fallen out of the market for watching emaciated hounds in tiny jackets chasing electric animals round and round at enticing odds.

Now, all I ask for Catford is that our future enemies spare its present giants of joy, the Blythe Hill Tavern and the Catford Constitutional Club, from any destruction they may deem necessary.

If they must smash Catford again, as others have in the past, surely there is no call to take its two temples of intemperance. Take Tesco, if you must. We can always find milk and oven chips. But these two boozeries are as irreplaceable as something that’s impossible to replace, like a heart, or brain, or bar stool.

Already the Catford Centre cat (see main image) is under threat, like there could be any better representation of the area than a giant fibreglass moggie being shat on by pigeons, in a place famous for dogs.

So with the loss of the greyhounds, a nervous giant cat and the South Circular Road ramming itself through the arse of the place, it would be unfair, if not cruel, to ever take away the two establishments that provide such splendid succour to the fun-seekers of SE6.

I feel like such a fool for having driven past the BHT so many times without noticing an oasis of civilisation until it was recommended by a reader (thanks, Niamh!). It has three rooms, each dedicated to gentle Irish pleasures. One tends towards golf, one to horse racing and the other nods towards literature – and all are dedicated to booze. It goes without saying that it serves a fine Guinness, but it’s also been named SPBW London Pub of the Year for the fourth year running. With its affable staff and regulars, it feels a bit like home, or would if your address was Number One, Heaven.

There’s a large garden at the back, with good cover for the wet weather smoker and a nice playground, should you fancy mounting a climbing frame or taking refreshment while presiding over your kid’s wonder years. There’s no wifi either, so there’s less chance of you forgetting them.

On Thursday nights the Blythe hosts an Irish music night (which is much better than it sounds), attracting some fine Irish musicians and a boisterous crowd of revellers.

For a place that’s not supposed to have much going for it, Catford is doing very well in the Places I Must Have A Pint In Before I Die stakes. The Antic Collective, those angels of pub invention, took over the awful Copperfield and turned it into the awesome Catford Bridge Tavern. When they were forced to move on they opened the CCC, wisely changing the name from the Catford Conservative Club to avoid being empty.

The bar staff are imbued with such a depth of beer knowledge that you almost feel like you’re talking to a medical professional. Thankfully, these doctors don’t ask how many units you take on board in a week. Whatever I tell my doctor, I get:

‘You need to halve that.’

The bar doctor prescribed a superbly-kept Brass Castle Sunshine and I began to feel better immediately.

The food is in the pub tradition, except that it is excellent. The CCC hosts film, comedy and vinyl nights, so like the Blythe is a part of a community that’s trying to have a good time, all the time. Our constituency, in fact.

Catford Dogs went without warning one night, like an incontinent uncle. It had been a South London institution for over 70 years when the Greyhound Racing Association announced its immediate closure, the morning after a meet. There was no chance for a bumper crowd to say goodbye, which given that dwindling attendance was the stated reason, could be described as fucking silly, if not a little heartless to those who loved it. 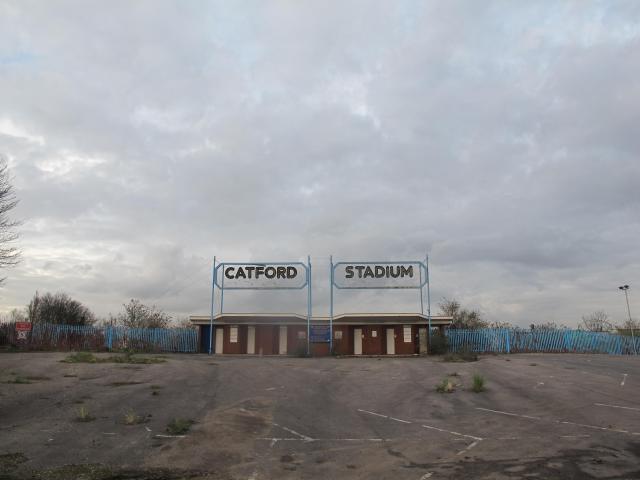 In truth, the stadium, once London’s most atmospheric dog track, had been left to rot while other, more lucrative, tracks were redeveloped. Going to the dogs is something many of us do once or twice in a lifetime, like arriving early for work, or sleeping with twins. The regulars were too small a group to sustain it and could hardly compete with the goldmine of 589 homes that should be completed there in 2017.

Legends such as Tallulah Bankhead, Lennox Lewis and Half-life had all performed a lap of honour there. Admittedly Half-life was nonplussed to be asked to present a trophy and even more so to be introduced as ‘Bridget’, something he hadn’t considered when blagging his way in posing as the local MP. Naturally, he had the last laugh, winning 50 nicker after feeding the favourite a cheeseburger.

If we accept that Ladywell Fields is in Ladywell, then Mountsfield Park is Catford’s top spot for views, smokes and the contemplation of philosophical roundabouts. Apart from being a fine park, it used to house The Mount a giant football stadium (50,000 capacity) which a local publican had built at vast expense. Unfortunately the team that played there (apart from Charlton Athletic for one season) was a small local amateur side, Catford South End FC and the enterprise went under. To lose one stadium may be regarded as unfortunate; but to lose two must be some kind of record.

The loss of green spaces is decried under the South Circular in Catford, by the graffiti of the mysterious ‘Lewisham Natureman’, whose simple but beautiful white stags adorn hard-to-get-to urban locations in the area, giving pause and pleasure to those that find them.

While it’s sad the Grade II listed Eros House replaced the Lewisham Hippodrome, it is at least a more successful example of Brutalist architecture than Catford Shopping Centre. Hopes that it would become the ‘Barbican of the South’ are unlikely to reach fruition unless the Barbican mends its ways and installs a Tesco and bargain shoe shop.

Catford’s other listed building, the Broadway Theatre, is a rather lovely Art Deco number, even if I can’t be tempted inside, not even by the lure of Amanda Holden’s psychic. The successful efforts of the Constitutional Club and pop up restaurant Catford Canteen to bring more creativity into the centre show there’s an appetite in the area for more than the obvious, though.

What’s to moan about?

TfL’s idea to reroute the South Circular, removing the god-awful Catford gyratory, still has no timetable or funding, mostly because it’s going to be hard. I wish I could take the same approach to paying my Council Tax.

The council aren’t being idle in trying to implement The Catford Plan to regenerate the town centre, but the biggest hurdle, the road that is choking the place, remains a blight. Unfortunately going east and west across South London is a bastard by road and a mo’fo’ by train. We could do with a Crossrail for South London and for drivers of otherwise empty vehicles to have a word with themselves.

Catford has added Ninth Life to its night life – a bar housed where the old Black Horse and Harrow was that is ‘inspired by festival culture’. It’s got bizarre immersive happenings, top notch DJs and, thankfully, food and booze till late.

The Catford Bridge Tavern has thrived since its reopening as a foodie pub and, with the addition of the Bottle Bar and Shop, SE6 now has an outstanding crawl to offer at last.

The Blythe Hill Tavern goes from strength to strength. It won the Deserter World Cup of Pubs to add to its numerous SE London CAMRA awards. Quite right too, it is one of the best pubs on this, or any, planet.

Half-life called me ‘lumpen proletariat’ for not knowing that Karl Marx once frequented the Black Horse and Harrow and that the Sapporo Ichiban on Catford Broadway was the best Japanese restaurant in South-east London. But he was less talkative when I asked him about his investment in Le Bourgeois, a Catford ‘sex bistro‘ in which customers combined fine dining with sexy times. Unfortunately it had to close down in 2013 after neighbours complained about fighting, drugs and sex parties, ‘like they were my fucking parents.’

Publove: The Fellowship and Star

Lend Me Your Erith

"RT @katbrown: Here is a lovely pony enjoying the rain in south London ☔️ https://t.co/LUOxHhM3wS"
4 hours ago
"RT @KDanielAguirre: Important fact buried in this otherwise dull article: “In 2016, Galloway tested the hydrating potential of a range of d…"
6 hours ago
"RT @theoldnunshead: Due to everyone being utterly bored of it we're not doing a Brexit event on FridayBut if you're in the pub at about 6…"
7 hours ago
"RT @DHFCbar: Making a shortlist for a dark beer to put on tap, and a low ABV for the fridges (2% to 3%)...Any suggestions from supporters…"
12 hours ago
"Top Monday behaviour.#MondayMotivaton #TrainBeers https://t.co/dnmmZ1FcTi"
12 hours ago