The tinsel has grown flaccid. The binmen have carted off your empties, like sacks of clinky tears. A New Year, a new you. Very similar to the old you, except that you’re less sure what year it is.

‘Should I try the gym?’ I wondered. But before I could respond I heard myself ask:

‘Does the Full English come with toast? No? Two of toast then. And a soupçon of black pud, if you don’t mind, Doris.’

Momentarily, I considered jogging. My position has always been that running in the street is fundamentally wrong and should be illegal unless you’re evading the law or escaping someone’s husband.

No, I’m not quite ready for a New Year regime of exercise, abstinence and occasional laudanum. The flesh may be weak but the spirit is completely fucked from too much booze, too much food and not enough drugs.

Luckily, there is a another way; a path to virtue that allows for generous refreshment – the Boris Bike Bender. Cycling to pubs like country folk, but without running into your cousins, who may be your sisters.

There are 70-odd docking stations in South London, most within striking distance of intriguing boozers, confirmation that we are living in an age of great wisdom. All those bikes are in Zone 1 however, as Boris’ advisors told him that everyone beyond owns their own horse.

I plotted a route that would skirt the borders of horseland and bikeland, from Shad Thames to Kennington – we frontiersman on pushbikes. Half-life insisted on joining me, hungover and moaning about a hard night. He enjoys a cycle, though mostly so he can abuse and threaten motorists. In order to make more friends on the road, he donned the football shirt of North Korea for the occasion.

With one of the finest leans in all of London, the Swift claims to be a ‘Local Beer House’, which sounds close enough to a pub to warrant visiting. There, I made the mistake of accepting a Scrabble challenge from Half-life, which descended into farce when he insisted on the validity of the word ‘cockbiscuit’.

I gained a measure of revenge watching him try to figure out how to release the Boris Bike for the next leg of our voyage.

‘You have to read the instructions’, I offered.

‘You have to read all the instructions. From the beginning.’

Finally, he got it.

Half-life then uncovered the first flaw in the plan as we were forced to ride past the Draft House at Tower Bridge. He moaned it was inhuman to pass a pub, but there was no docking station nearby. Well, there was, but we’d just left it one minute earlier.

Simon The Tanner used to be good, then went a bit shit, then it closed. Now, it’s ace again. The couple who own it have two other pubs, all dedicated to the cask. Here though, I made a serious tactical error. I was persuaded by the barman to taste Ryseing Tides, a beer that claimed to be ‘bursting with tropical fruits and berries’, something that should only occur in cocktails or somebody else’s breakfast. But it was mood-alteringly superb. I ordered a delicious pint, then realised it was 7.4%. I was supposed to be cycling, though on the plus side I now felt like I was king of the freaking universe.

A further flaw in the plan was uncovered when I realised I’d have to get another release code to get another bike. It didn’t cost, but it meant more arse ache and I could see problems on the horizon if I was expected to continue this level of transport admin. Get yourself a key if you’re going to try this exercise and ale extravaganza.

Soon we were riding with accompanying ‘Whoo hoo!’s and Half-life screaming ‘Scrubbers!’ at some passing nuns. Sadly, our joy was short-lived. The Leather Exchange was closed. As a Fuller’s pub it was only ever going to be adequate, but now it had failed in its primary objective, which is to make me happy. Furious, Half-life then told me we had to take a detour so he could see Ollie the Schnoz and swap some ketamine for pancetta, in one of life’s more puzzling barters. He couldn’t understand my concern with leaving the planned route.

‘It’ll take two minutes! Don’t be such a knob-badger,’ he moaned, playing the long game for future Scrabble clashes.

We arrived on Southwark Street to find only one docking station left, and that was blocked off by a fat lad in a Crombie.

‘Excuse me, mate,’ said the ever polite Half-life. ‘Move your lard out of the fucking way unless you want me front fork stuck up your grid.’

The obstacle explained he was minding the last available slot for his girlfriend, who was on her way.

‘Not any more you’re not,’ said Half-life, before suggesting that, if he didn’t shift, his girlfriend could dock between the man’s cold, dead arse cheeks.

This prompted the romantic hero to assume a boxing stance, to which Half-life responded by treading on his front foot and punching him hard on the nose, just as his girlfriend arrived. She gave lover boy a slap too and screamed at him as they went off, presumably to get married.

Half-life was badly shaken, he claimed.

‘I abhor violence,’ he said, as indeed he had told any number of magistrates.

To settle his nerves, I got him a pint at The Sheaf (Dock: The Hop Exchange) and then another when he suffered a relapse when almost passing The Glad (Dock: Borough High Street).

Parking up in the backstreets of the Elephant, Half-life unleashed a Blue Peter (one he’d made earlier), which we proceeded to smoke in the Georgian splendour of West Square. The ancient mulberry trees in the public gardens have to be held up by bits of wood. It wasn’t long before I knew how they felt.

We toddled over to the Albert, a classic Victorian backstreet boozer, with two bars, the Albert and the Victoria. The menu looked fab but we had just smoked our appetite. Sky Sports News’ ticker rolled past our unseeing eyes. If it had announced the England captain was leaving for some football backwater, we wouldn’t have noticed.

Happier, wobblier, we picked up our bikes. It didn’t seem like such a good idea anymore, so, ever mindful of health and safety, we decided to ride on the pavement, like children. Drunk, stoned children, packing pancetta on a pub crawl. 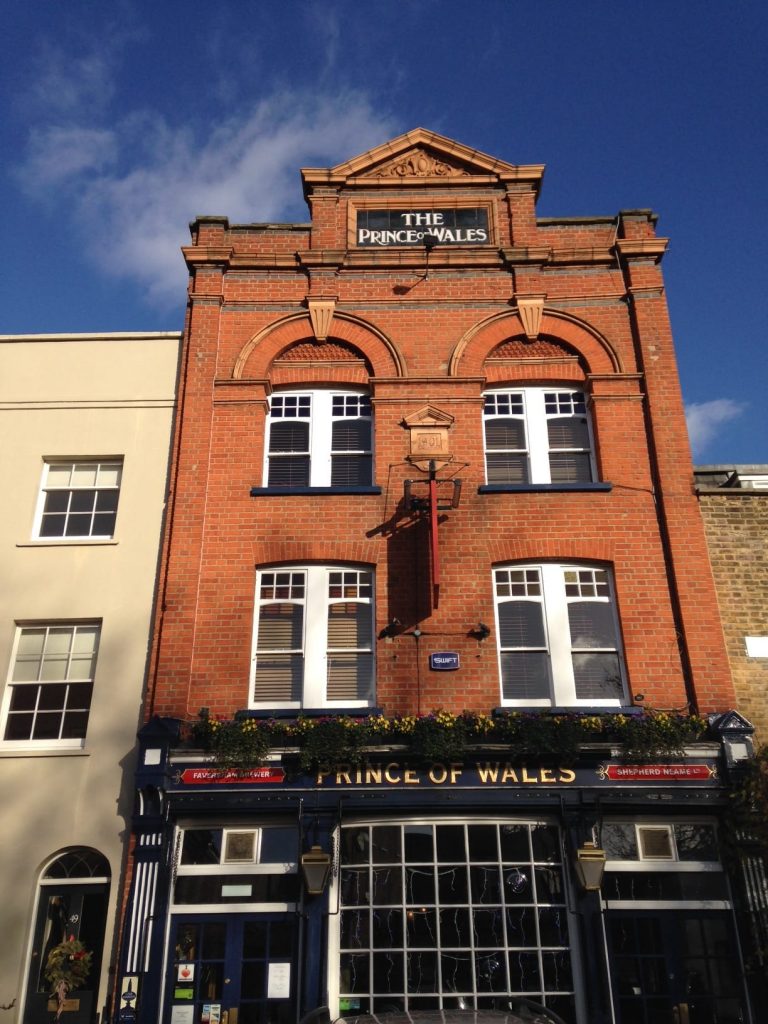 Dock 5: Cleaver Street for the Prince of Wales

Half-life was apprehensive about visiting the PoW as the last time he’d been there, some years ago, the potty landlady had wrestled him off his stool and onto the floor, from behind, for no apparent reason. I’m not sure I believed the ‘no apparent reason’ bit, but it’s a delightful little pub on another lovely Georgian square, so we took our chances.

Architectural critic Ian Nairn considered Cleaver Square to be at odds with the spirit of South London, ‘always risking a bust in the mouth’. Indeed, when we arrived, there were four old boys playing pétanque in the peaceful sun-dappled square, as if they’d forgotten where they were.

The gents who agreed to play us looked like they regretted it from the moment Half-life pulled his rubber gloves from his bag and began his stretching routine.

And I knew we’d won from the moment he got under their elderly skins with graphic tales of age-related incontinence and a lament on the state of the modern funeral.

I dread to think what else was in Half-life’s bag. The only thing I could be certain of, as I shelled out for another pint in the gloaming, was that it didn’t contain his wallet.

A Day at the Races

"There’s only one you.Which, let’s face it, is good thing."
11 hours ago
"RT @ldnloocodes: Hello. We'll be tweeting the codes for loos in various cafés around London as we get them. @ us with codes so we can retwe…"
13 hours ago
"@mralistairgreen cc @rvamarsh @PaulPawhitehead @oohrogerpalmer @chrispressley"
18 hours ago
"RT @typejunky: Lads, I’ve found an escape route. Who’s with me. https://t.co/ZLnGkXRR5f"
21 hours ago
"It's Friday. Bring out your baskets. https://t.co/i2m2Ta9vYm"
21 hours ago