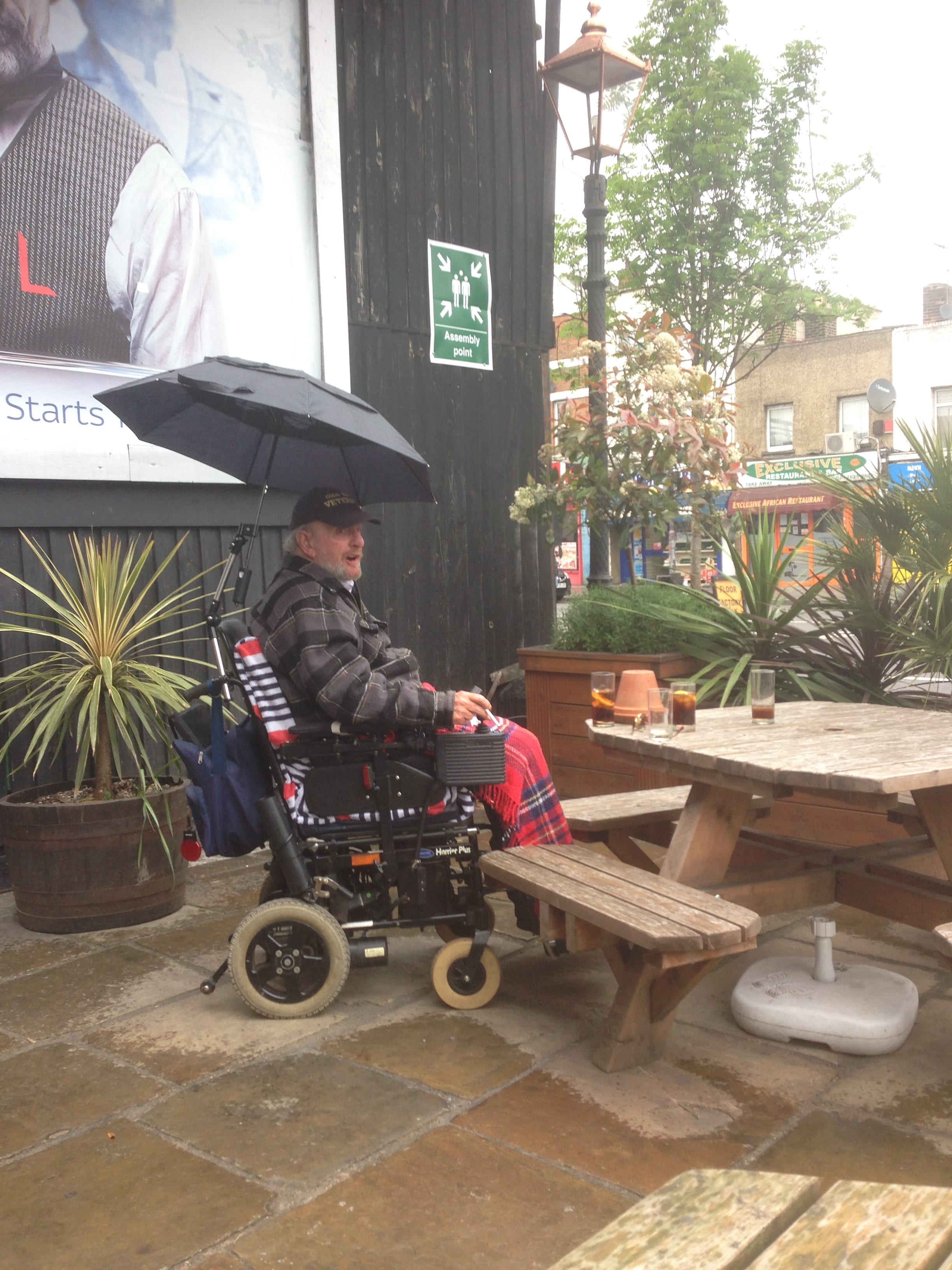 The Dulwich Raider/26 May, 15
HistoryPlaces

Part 1 of this post can be found here: Streetlife: Old Kent Road – Part 1

At length, Half-life settled back into his chair, set about refilling his empty bladder and went on with his tale.

Some time after his own release from prison Half-life duly paid a visit to the OKR one afternoon and asked at the bar of The Green Man for Joe Quigley. He was told to talk to the bouncer.

‘Who wants him?’ asked the bouncer. Half-life told him and the bouncer disappeared through a side door while Half-life waited. Of the three men in the bar, he couldn’t help noticing, he was the only one wearing a top.

‘Quigley’s on two,’ said the bouncer when he returned, and as he held the door open for Half-life a sawn-off shot gun clattered to the floor from behind it. Half-life caught the man’s eye.

‘In case I want to kill myself,’ said the bouncer, in a rare display of bouncer humour.

Half-life ascended the stairs and entered Quigley’s lodging. The sitting room was decorated in the most opulent fashion; Persian rugs underfoot and thick velvet curtains keeping the traffic noise at bay.

‘You should have seen the place,’ said Half-life. ‘All the sculptures, the paintings, the art… objects.’

‘Objets d’art?’ I offered, and Half-life flicked me his death-stare.

‘Do you want me to finish this fucking story or not?’ he said.

‘If only,’ said Dirty South.

‘In that case,’ said Half-life, ‘You will have to buy me lunch at Frank’s.’

The next stretch of the OKR is predominantly housing blocks punctuated by some of the aforementioned oversized shopping outlets.

‘If you squint it looks a bit like LA,’ I said. ‘Or some run-down US retail strip.’ And we all walked along with slitted eyes until Half-life walked into a bus stop.

We stopped to admire the History of the Old Kent Road, a remarkable mural by Polish artist Adam Kossowski. It is on the exterior of the former North Peckham Civic Centre, now – almost inevitably in this part of the world – some kind of oddball take on a church.

‘Oh my God,’ said Dirty South as we passed the infamous KFC, framed by two enormous and quite beautiful gasholders. ‘There she is. The slowest deep-fat fryer known to man.’

On the corner of Commercial Street we paused outside the New Saigon restaurant, once better known as The Kentish Drovers pub. Looking up, we could still see the remnants of a tiled scene depicting herdsmen droving their cattle to market.

Remarkably, no-one had mentioned that there may now not be another pub on the OKR. I think our anticipation had turned to Frank’s and my hunch was confirmed when Half-life announced, ‘I’m having the seafood spaghetti and a pint of Barolo,’ as we strolled past a giant Toys R Us.

‘That’s what you had last time, when we cleared out Dirty South’s garage.’ I said.

‘The same,’ said Half-life, and we laughed about Dirty South’s text asking if we might be available to assist with some lifting, to which Half-life had responded, ‘I’m not that sort of friend’.

Once again, the past was rudely interrupted by the present.

‘Oh, God, no.’ said Dirty South, looking up and down a parade of shops set back a little from the road.

‘Where is it?’ said Dirty South

Oh, reader. We live in the city because we love change, the constant upgrading, the movement, the cycles. Where a new gaff opens here, or someone tries a pop-up strudel bar there. To live where nothing changes, where everything simply remains, would crush our giddy, optimistic souls. But the pace is so relentless that once in a while it catches you unawares. You turn away for a moment and a dear old friend is lost forever. If only things could stay a little bit the same.

Yes, Frank’s was gone. An OKR fixture, an Italian haven in which lunches turned into dinners and dinners into lock-ins. We stood in a forlorn huddle on the pavement and considered our options.

‘We could get some tins and a sarnie from the Nisa and have a picnic on the roundabout outside Southwark dump,’ I suggested, to general incredulity.

‘Right,’ said Half-life, taking charge, which is always a worry, ‘Follow me. The best burgers in town are from the van in the B&Q car park.’ And we set off back up the OKR.

‘I didn’t know you had a garden,’ said Dirty South.

‘I don’t,’ said Half-life. ‘It’s in the lounge. I sit in it to read the papers.’ Since no-one has ever set foot in Half-life’s lair there is, sadly, no way of verifying this wonderful image.

But when we got to B&Q the burger van was nowhere to be seen.

‘Fuck it,’ said Half-life. ‘Must only be at weekends.’ Now rain started to fall. This afternoon was falling apart. We looked about for shelter. Looming above us were the giant golden arches of a 24 hour drive-through McDonalds. Surely not.

‘I try to avoid McDonalds as a rule,’ I protested.

‘That’s because you’re a snob,’ said Half-life. ‘It’s this or Halfords.’

Confronted by that sugary nidor peculiar to fast food outlets, Dirty South and I made do with a coke and a coffee respectively, while Half-life tucked into a Double Chicken Legend, large fries, large Coke and Big Mac on the side ‘for old time’s sake’. Somehow, he is as thin as a rake. (Actually, I think I know how but that’s another story)

‘Do you have any demerara sugar?’ I enquired of the clearer-upper at the coffee accoutrement counter.

If you like to eat junk food while staring out at a rainy car-park, then this is the place for you. Having said that, the place was filled with happy, smiling, chatty people so, really, who’s the cunt?

‘You are,’ said Half-life, never one to leave a rhetorical question in peace.

It was with a heavy tread that we returned to the hurly burly of the OKR when the rain eased. What if our fears came true and there were no more pubs to be had?

‘We’ll have to head down into New Cross,’ said Dirty South.

‘At some point it stops being the Old Kent Road, though,’ I said.

‘Sod that. Needs must. We’re not cartographers,’ said Half-life.

And then, as if rewarding our attempts at good cheer, just past the Aldi and an outcrop of stark tower blocks, we came to number 888, Old Kent Road, possibly the last building on the OKR proper. 888 is the number of Jesus, apparently, of Christ the Redeemer, and also represents triple good fortune in Chinese numerology. Who knows, maybe there is something in all that mumbo-jumbo, for 888, Old Kent Road, is a pub.

More specifically, it is the The Windsor Hotel (formerly The Breffni Arms). While handsome enough on the outside, the interiors have been done out like a 1980s hotel conference room, which was a bit disconcerting. But fuck it, we weren’t in the mood for nit-picking. We were in the mood for booze.

We took our pints out onto the roadside terrace and Half-life once more cranked up his never-ending story.

In his rooms above The Green Man, Quigley poured two large brandies from a glass decanter and the two men sat facing each other across a French polished dining table, catching up on mutual acquaintances and bastard screws, pausing occasionally to toast their freedom. Once again, Quigley thanked Half-life for taking him under his wing, for making his stretch bearable.

‘I have something for you that I know you will appreciate,’ he said. ‘A painting. It is yours, as a token of my gratitude. But before I give it to you, I ask that you give me something in return.’

Half-life paused in his storytelling and took a long draught of his continental lager.

‘Well? What did he want?’ I prompted.

‘Two grand?’ I said and Dirty South, who had unfortunately just taken a mouthful of beer, proceeded to spray it over the table.

‘So he was basically selling you a painting,’ I said, trying not to catch Dirty South’s eye, who I could see was fighting a belly laugh.

Quigley fetched a parcel from the other room and unwrapped it on the table. For once in his life Half-life was rendered speechless. Quigley leaned the painting against the back of a dining chair and the two men stood to admire the colours, the composition, perspective and above all the light and shadow that brought the simple domestic scene to life. Then they sat down to finish the brandy.

‘As if I’m going to tell you,’ said Half-life. ‘Let’s just say it takes a brave man to split the bill,’ he added, gnomically. ‘Even you dozy cunts would recognise it.’

It turns out that art heists are a waste of time. The artefacts are impossible to sell, even on the black market, as what underlies their market value are such mundanities as provenance, authenticity and proof of ownership. But for Half-life the value was intrinsic, and well worth a couple of grand cobbled together from weed sales.

We were interrupted by a grizzled old dude in a motability scooter sporting a specially adapted umbrella arm to allow him to drink rum in the drizzle.

‘Are you boys waiting for meat?’ he said. I thought about this for a moment.

‘The Friday meat van. Comes every week. You’re not from round here are you?’

‘No, I’m from down the road,’ he said. ‘You’re from Camberwell.’ And it seemed rude not to concede the point.

Dirty South and Half-life went to the bar and I told the meat man about our day of closed emporiums and lost palaces – the famous old pubs, the nightclubs, Frank’s, the Chinese Elvis…

‘Yeah, it’s been getting shitter for a hundred years,’ he said, which we agreed could be a promotional slogan for the OKR tourist board.

Today, though, the OKR is a designated ‘opportunity corridor’, with millions of pounds earmarked to make the street more pedestrian-friendly and provide more community amenities, as well as thousands of new homes and jobs. There is even the likelihood of the Bakerloo line extension coming down this way. The OKR may be at a low ebb, but if like me, you’re as fond of ebbs as the flows, now might be the time to see it.

‘It’ll never be the same,’ said the meat man. ‘Doesn’t matter how much they spend on it. You can’t buy the real thing.’ And he motored off back to his table, to which his other half had brought more rum. (Some life these disableds have. And why the fuck not?).

‘So this painting,’ I asked, when Half-life and Dirty South were back. ‘What did you do with it?’

‘I sit and look at it every day.’ said Half-life, lighting a roll-up.

‘So if you could sell it, how much would it be worth?’ asked Dirty South. Half-life blew his cheeks out.

‘Couple of hundred, maybe?’ he said.

‘Million,’ he said, and pocketed my lighter.

Further reading: London Pubology, including a list of all the pubs that have ever been on the OKR

The O2: Inside the Outside 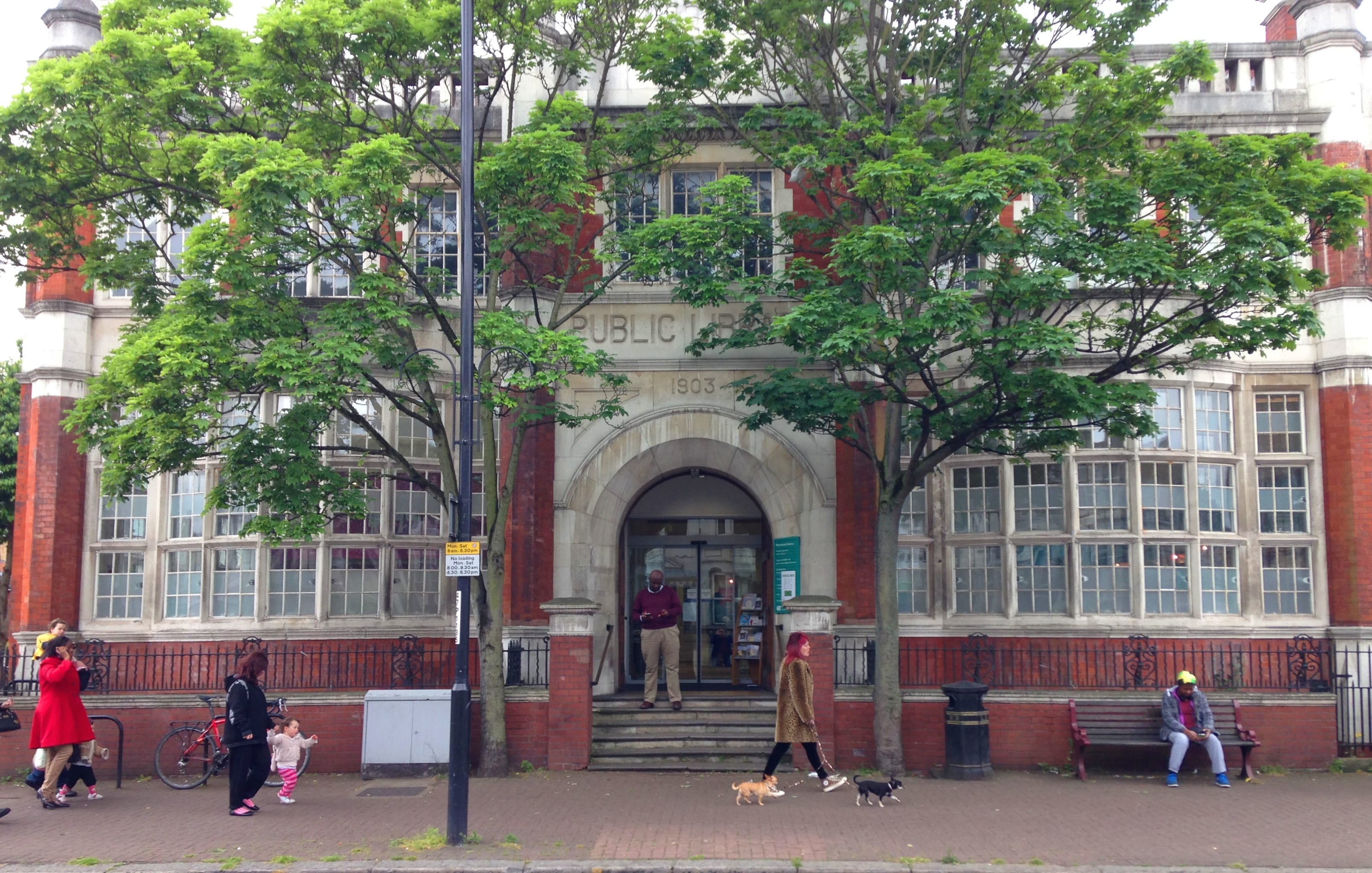 "There’s only one you.Which, let’s face it, is good thing."
11 hours ago
"RT @ldnloocodes: Hello. We'll be tweeting the codes for loos in various cafés around London as we get them. @ us with codes so we can retwe…"
14 hours ago
"@mralistairgreen cc @rvamarsh @PaulPawhitehead @oohrogerpalmer @chrispressley"
18 hours ago
"RT @typejunky: Lads, I’ve found an escape route. Who’s with me. https://t.co/ZLnGkXRR5f"
21 hours ago
"It's Friday. Bring out your baskets. https://t.co/i2m2Ta9vYm"
21 hours ago