We’d been meaning to come to South Norwood for some time, drawn by the South Norwood Tourist Board’s mantra: ‘Celebrating what others fail to see’. It could be a motto for all of South London.

But it was the opening of the new Antic pub, the Shelverdine Goathouse that finally got us off our arses for the 13-minute journey from London Bridge to Norwood Junction. Antic, too, celebrate areas where Pubcos fear to tread. We were going to get on fine.

I started at Coffee Craft, the sweet caff in the lovely Edwardian venue, the Stanley Halls. With its film club, performances, excessive yoga and upcoming CAMRA beer festival, you could say Stanley Halls is the cultural heart of Norwood. It’s named after William Stanley, a noted local inventor, architect and philanthropist (plus painter, writer, musician and photographer). Back in the day, geniuses used to try their hand at anything they enjoyed; there was no barrier between the practical and the creative. Nowadays our best and brightest tend to stick to one discipline, though to be fair, singer Cheryl Cole does have her own perfume and shower gel.

But if Stanley Halls is the heart, then the Sensible Garden could be considered its soul.

The Sensible Garden is the brainchild of the SNTB, whose other fine work includes a failed attempt to get Norwood Junction station renamed Norwood Intergalactic. The SNTB, with the help of the community, turned a derelict piece of land on the high street into a green space in which to pause, be seated and enjoy a little can of what-you-fancy. The Sensible Seat, the world’s first park bench to be named after a punk, was unveiled by Captain Sensible himself two years ago. The solo artist and co-founder of punk legends, The Damned, went to school over the road and later went on to form The Blah! Party, whose policies included stopping the Iraq War and making John Prescott lose weight.

After sitting on this nobly reclaimed land awhile, it was time for a stroll in the fresh air and green pastures South Norwood is known for (possibly). There’s a lovely walk around South Norwood Lake and Grounds – a remarkable beauty spot that even some locals are yet to discover. The lake has several timber platforms dotted around it for anglers to spend the day in solitude with their maggots. They’re equally tempting for a toke with a view, if you like that sort of thing. However, I’d arranged to meet Half-life at the South Norwood Country Park, the area’s other green expanse, with the express purpose of playing an 18-hole game of pitch and putt on its lovingly tended course.

The walk to the park revealed a virtual graveyard of closed down pubs and a surfeit of pebbledash. The park itself has been through many changes over the years: From part of the Great North Wood, to ancient moated house, to sewage farm, it is now a real slice of the countryside, with no building in sight for most of its 125 acres and nature running amok, willy-nilly.

‘Thank fuck for the car noise,’ said Half-life of the distant sound of traffic. It is comforting being reminded you are not in the actual country and are only minutes from speed bumps, wifi and artisan olives. ‘What is a sewage farm anyway?’ he went on. ‘Aren’t we all sewage farms in a way?’

The park is now a glorious wilderness, but sadly, infuriatingly, the pitch and putt was closed, without explanation or indication of when it would open. Shit, being closed for no reason was taking this country imitation too far. I wouldn’t have minded so much but it was too early for the pub. What the fuck were we supposed to do with ourselves? It’s no wonder country people are forever stabbing horses in the arse for fun.

You could easily get lost in the Country Park and indeed we did, immediately, which at least lent us some purpose. When we found our way again we had to cross a tram line to get to the streets. It gave us that exciting sense of danger you get in the country, where you’re never entirely sure you’re not about to be eaten by a larger animal, like a wild boar or a farmer.

On the way to the pub, we ran into another pub. The Albert Tavern is a pleasant enough backstreeter that shows all the football and has a Sunday meat raffle. I love the idea of going to the pub to win dinner. Unfortunately my ale had more floaters than Tony Soprano’s pond, so we didn’t hang around. We headed to the Gold Coast, South Norwood’s West African pub. We’d just stopped for Guinness but the smell from the garden’s grill persuaded us to try the chef’s special: Chicken with rice and black-eyed peas. Flavourful and spicy, it was a real treat and a departure from most pub fare. This you don’t get in the country.

From there we travelled to the southernmost London pub of all time, the Joiners Arms. That is to say, the pub nearest the equator with a London post code. Beyond it is Croydon, a mysterious world from where few travellers have returned. The Joiners feels every bit as country as the park. Almost every inch of wall and ceiling is covered with ephemera, from horse brasses to stuffed birds. It’s dark, welcoming and cosy. Just a shame they didn’t have more than Doom Bar on, or we could have seen out the winter there.

We paused in Brickfields Meadow (a meadow on the site of an old brickworks) for a smoke in the children’s play area and pondered the significance of the concrete mini-maze like addled mystics.

By the time we arrived back at the Junction, it was still too early for the Antic pub to be open (don’t get me started), so we popped in the Cherry Tree, another ‘half a Guinness’ pub – a pub with either no ale, or ale you don’t trust. It’s Polish-run but nonetheless rather patriotic, with St George much in evidence. The regulars seemed a decent bunch, but Half-life watched in awe as a woman punched another woman in the face after she’d refused to let her assailant touch her hair.

In the garden there’s a mural of a Crystal Palace eagle smiting a Brighton seagull, reflecting one of football’s more mysterious rivalries. It’s thought it began, or at least intensified, in 1974/5 when the two teams, managed by Terry Venables and Alan Mullery respectively, played each other five times in one season. In a second FA Cup replay, the referee, Ron Challis, subsequently known as ‘Challis of the Palace’, ordered Brighton to retake a successful penalty because Palace players had encroached in the area. It was saved and Palace won 1-0. Mullery went ballistic, especially after a Palace fan chucked hot coffee at him. He threw down some change, shouting that it was all Crystal Palace were worth. They’ve hated each other ever since, to the bemusement of the wider football world.

I had to drag Half-life away as the Shelverdine Goathouse was about to open. We arrived at 15 seconds past four and were beaten to the bar by about half a dozen punters. Clearly the thirst for a decent pub is strong here. Having been deprived of a good pint all day, we made our way through their range: Beatnik, Signature Pale, Neck Oil and Jaipur, pausing between pints for a smoke up.

‘See you in 20 minutes, boys,’ the barmaid winked. And there was us thinking we were being discrete.

Half-life accused me of slipping him acid after coming out of the gents screaming, ‘The goats, the goats!’

He calmed down when I told him I’d seen the pictures on the wall of people with goats’ heads too. Something about the combination of Victorian refinement and cloven-hoofed weirdness freaked me the fuck out as well. It was probably the most powerful anti-drug message I’d ever seen. I tried not to look in their eyes and focus on the hands but my eyes were inexorably drawn to their spooky rectangular pupils. Worryingly, Half-life thanked me for making him feel normal.

‘They should name all stations after pubs,’ suggested Half-life.

‘It would mean a lot of Kings Arms, et cetera, if you named stations after pubs. You wouldn’t necessarily know where you were.’ I said, like a bore.

‘You’d be in a pub. Who gives a fuck where you are?’ concluded Half-life.

We stayed a little longer as the welcoming hosts at the Sailor let Half-life order in Thai food (and chips). It had been a long day, but afterwards he wanted to go back to the ‘good pub’. I assumed he meant the Goathouse, another Antic success story, doing a thriving business with customers they weren’t even sure existed until they opened their doors. But from my bus window I saw him turn towards the Cherry Tree, possibly in hope of finding a nice girl with a criminal record for the night.

There was an application to open a late bar near Norwood Junction station in evidence. Along with the Goathouse, the Joiners, the Gold Coast and committed campaigns to reopen the lovely old Ship and Portmanor pubs, it’s easy to see South Norwood ‘happening’. It’s got a diverse community with a sense of civic pride and we all know the arrival of fine beer foreshadows enlightenment. It might have some rough edges but how else can you be sure you’re not in the country?

Listen to Dirty South and Dulwich Raider talk about South Norwood, among other things, in our first podcast:

With thanks to the Shelverdine Goathouse for use of the main image. 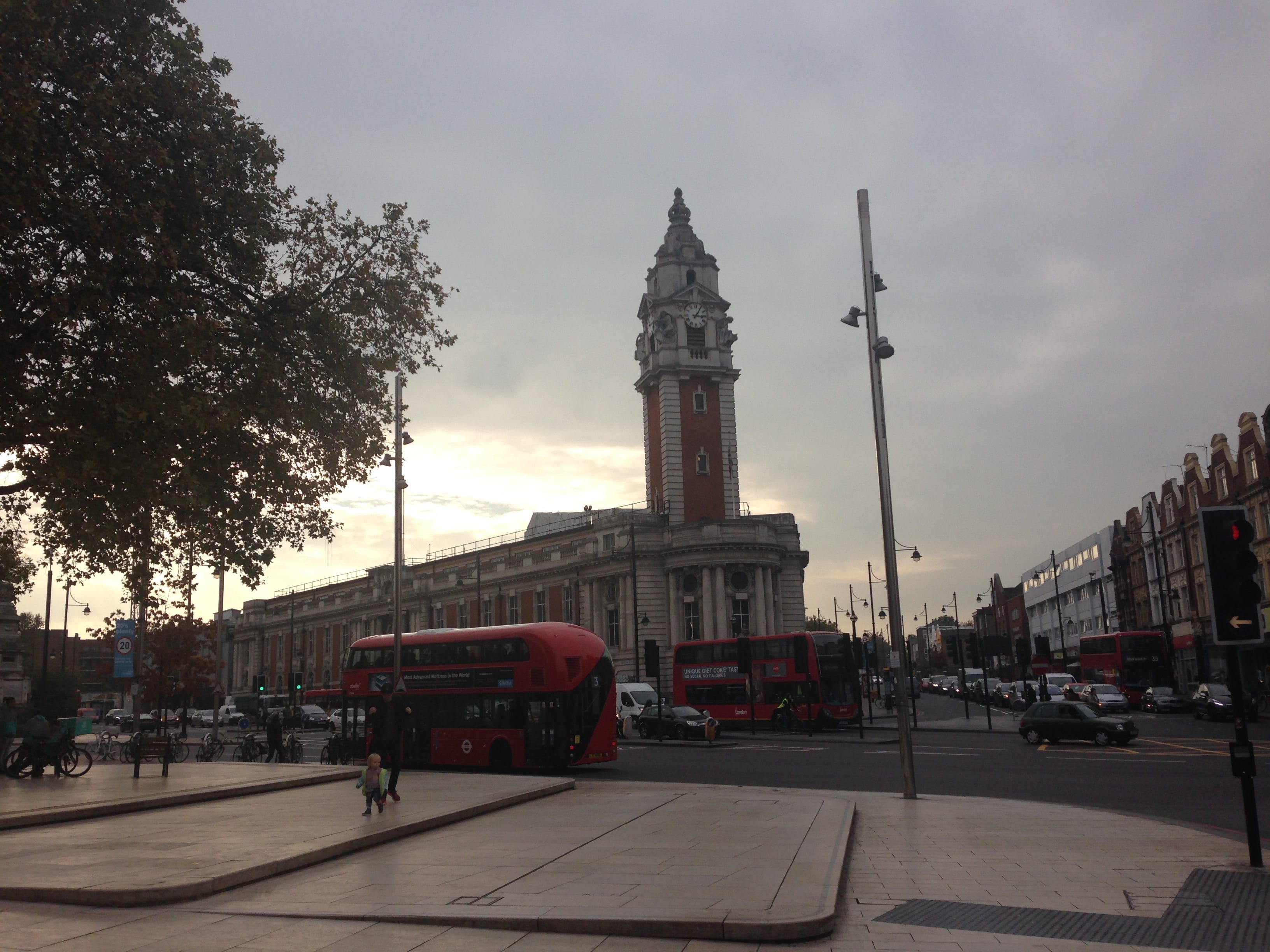 "There’s only one you.Which, let’s face it, is good thing."
5 hours ago
"RT @ldnloocodes: Hello. We'll be tweeting the codes for loos in various cafés around London as we get them. @ us with codes so we can retwe…"
8 hours ago
"@mralistairgreen cc @rvamarsh @PaulPawhitehead @oohrogerpalmer @chrispressley"
13 hours ago
"RT @typejunky: Lads, I’ve found an escape route. Who’s with me. https://t.co/ZLnGkXRR5f"
15 hours ago
"It's Friday. Bring out your baskets. https://t.co/i2m2Ta9vYm"
16 hours ago