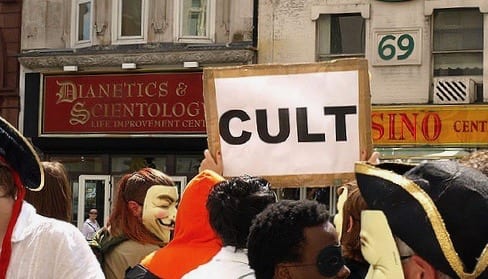 Is Deserter a Cult?

Watching Wild, Wild Country, Netflix’s fascinating docuseries on the ’70s and ’80s Rajneesh cult that arrived in Oregon from India, I was struck by the guru’s emphasis on celebration, creativity and humour. Also impressive was the tons of money and shagging.

Bhagwan Shree Rajneesh’s mission to raise consciousness, change the emphasis of people’s lives and have us get more out of our waking hours sounded strangely familiar. Maybe even a little Deserter-y.

The Bhagwan had millions of followers in his lifetime and his books and pronouncements gathered him many more after he died. Among his ten commandments were:

‘Never obey anyone’s command unless it is coming from within you also.’ Which I took to mean: Do whatever the fuck you want.

‘Do not swim – float’, he said. Meaning: If something is hard, stop and have a lie down.

‘Do not search. That which is, is. Stop and see.’ That’s basic pub crawl psychogeography, that is.

Most gurus reject material goods and demand sexual discipline. Rajneesh was driven around in a Rolls and encouraged sexual freedom. Some believed him to be one the 20th century’s most original thinkers. Others, like the author Farrukh Dhondy, derided him as a con man, saying his: ‘Interpretation of Indian texts is specifically slanted towards a generation of disillusioned westerners who wanted … to “have their cake, eat it” [and] claim at the same time that cake-eating is the highest virtue according to ancient-fused-with-scientific wisdom.”

Dhondy’s quote was supposed to be critical, yet it seems to sum up the highest ideals of Deserterism. I mean, what is the point of cake if you’re not going to eat it? OK, once it’s gone, it’s gone. But if you replace ‘cake’ with ‘pint’, logic dictates that once you’ve eaten your pint, you have another, immediately, if not sooner.

The parallels with Deserter led me to some searching questions. Are we a cult? And if so, when are we going on the razz with Louis Theroux?

We do frequently get emails from people who have chucked in their jobs and joined the ranks of the funemployed.

‘I’ve done it! I am a Deserter!’ they cry. Unfortunately it’s then a bit late to insist they give us 30% of their salary. But yes, we are proud. Proud our words have not fallen on stony ground, but into the ears of lazy, like-minded feckers.

Maybe it is time to register Deserter as a charity, demand tithes and become millionaire-charlatans swanning around on a private jet with a well-stocked bar. Take our message to the world. Maybe bring out our own range of slippers.

What makes a cult?

I don’t know about charismatic leader but seasoned observers will note that the Dulwich Raider does wear sandals from May to October, some would say, religiously.

Our core beliefs do differ from the majority, that’s undeniable, along with devotion to mottoes such as ‘Shirk, rest and play’ and ‘Seize the day after tomorrow’. Indeed some of our apostles can be seen wearing robes bearing these wise ancient proverbs, for which they have parted with dollar and thence gone forth unto the multitude.

Though we did crowdsource our book, and even sell a little merch, we’ve not done a great job of economic exploitation. Not that we have a strong moral objection, we just can’t be fucked.

Bhagwan had his ashrams across the world and almost took over over an entire American town. Their ranch was a hotbed of meditation, chanting and ecstatic writhing. Certainly a modern day Sodom and Gomorrah – where anything goes and happy hour never ends – appeals enormously to the Deserter. But, were we to set up a Deserter homeland in a South London commune, where drugs were legal, pubs never close and there’s a sofa on every street, we’d be more likely to use the street furniture for naps than humping the faithful.

The only chanting we’ve done has been at Dulwich Hamlet – another potential cult, if you ask me. Someone should certainly be looking into it, if you’re reading this, Louis.

Many cults claim, ‘We alone know the truth. If you leave us, .you risk your salvation’, which I believe is present in the terms and conditions of our newsletter. I can’t be sure, mind, as due to a debilitating medical condition I’m unable to read Ts & Cs, fill out forms or contemplate any document I’m obliged to sign.

Brainwashing is probably beyond us, we accept that. You need to have people’s full attention for indoctrination, which is where a commune comes in handy. It’s hard to lead your flock astray when you’re leaning on the bar eyeing up the craft selection. This, I suppose, is an unheralded benefit of the UK’s brewing revolution.

To sum up, we might be a cult, but if we are, we’re not a very good one. Why not join us and accept the Lord Sloth as thy saviour.

"RT @katbrown: Here is a lovely pony enjoying the rain in south London ☔️ https://t.co/LUOxHhM3wS"
5 hours ago
"RT @KDanielAguirre: Important fact buried in this otherwise dull article: “In 2016, Galloway tested the hydrating potential of a range of d…"
7 hours ago
"RT @theoldnunshead: Due to everyone being utterly bored of it we're not doing a Brexit event on FridayBut if you're in the pub at about 6…"
9 hours ago
"RT @DHFCbar: Making a shortlist for a dark beer to put on tap, and a low ABV for the fridges (2% to 3%)...Any suggestions from supporters…"
13 hours ago
"Top Monday behaviour.#MondayMotivaton #TrainBeers https://t.co/dnmmZ1FcTi"
13 hours ago