They call it Sydenham

They used to to call it Sippenham.

‘Sydenham, did you say?’

‘Oh, I thought you said Sydenham.’

It’s as easy as that. Possibly. Olde worlde Sydenham was based around what we now call Lower Sydenham, before its centre moved up the hill to where medicinal waters were discovered and people went for a dippenham.

As moneyed newcomers arrived, grand houses sprung up around Sydenham Wells Park. The new centre was confirmed by the railway station and the reach of the town soon extended to the lovely ancient woodlands of Sydenham Hill Woods to the north, as covered by the Raider and Half-life in the most recent Great Train Journeys.

‘Insects, bats and fungi,’ she claimed.

Lower Sydenham became industrial and commercial and Sydenham Hill remained leafy, hilly and swanky. The centre of Sydenham evolved into a thriving blend of 21st and 20th century London, mixed economically, culturally and architecturally – a fast-changing environment that also accommodates a slow lane.

Sometimes it’s the cafés that are the first in to announce the winds of change. Sugahill on Kirkdale was in the vanguard, opening its doors eight years ago, challenging the dominance of the greasy spoon with fine coffee and that unlikely symbol of cultural revolution, the fresh croissant. But the new cafés seek to do more than tend your hangover and speed your cardiac event. Sugahill has vinyl nights and record fairs to keep the place ticking over. They welcome the long stay and the laptop, and what’s more, they sell booze. Blue Mountain is another excellent café with craft beer and quality food in a welcoming community atmos. You’ve got everything you might need to hide out there in an apocalypse, provided the zombies don’t develop a taste for sticky buns.

Further down Sydenham Road, there’s the gourmet Vegan cafe and gallery, Calabash of Culture, along with On The Hoof and Cherry & Ice, delivering a wealth of caffeine options in relaxed surroundings, to challenge the fry-up standards of Sema’s and the Hilltop Cafe.

Roxy remains somewhat unreconstructed on vegan cuisine. ‘If vegetables are so good, why do they have to make them in bacon and sausage shapes?’ she says. ‘You don’t see me fashion my pork chop like a floret of broccoli, do you?’

Nowhere is the chasm between generations more naked than in the pubs. In Fox’s, you’ll find the greyhairs, watching the racing, playing pool and having a proper grumble. It’s a big pub – and it needs to be given the size of the landlord. Like many Irish pubs, the ale offer is minimal (Courage Best) but unlike a lot of Irish pubs, it’s not the most welcoming, with the definite air of ‘You’re not from round here, are you?’

That didn’t stop me being offered something that fell off the back of a lorry, though. And when Roxy joined me, it was good to see twinkles return to rheumy eyes.

Across the road, 161 Bar harbours a different reality. Psychedelic pop on the speakers, cakes on the counter and pumpkin, thyme and cheese muffins on the menu. But what’s this? Delicious beer from Late Knights, Fourpure and Canopy? Also, Roxy was not the only woman in the building (though apart from that, she liked it).

161 provides another of those bar/cafe crossovers, but the well-kept cask ale suggests it thrives as a bar once the highchairs have been put away. Traditionalists may scoff at its poncier details, but maybe they just don’t like fine ale and female company as much as I do.

Also traditional, but not as scruffy as Fox’s, is the Bricklayer’s Arms, a handsome corner pub on Dartmouth Road. The interior doesn’t quite reflect the character of the exterior but it’s more than an old boy’s pub, hosting the United Sound of Sydenham’s ska, reggae, soul and funk nights till late.

I assumed The Pavilion pub, with its prominent cricket ball sign, was named for W.G. Grace, England’s greatest ever cricketer and former Sydenham resident. Alas, I couldn’t see a mention of him inside. The ale, Courage Director’s, was a nominal step up from Fox’s and the regulars more open to strange faces. The place rang with laughter as the racing and Murdoch’s news went largely ignored on the screens, though it suffers from a rough house rep that saw licensing restrictions and a temporary closure last year.

Further down the hill sees Sydenham’s pub competition hotting up, with two old standbys who have dolled themselves up, alongside a youthful newcomer. The Dolphin has scrubbed up well and seems well liked, having been tastefully furnished and with well kept ale and a nice garden. The food looks a little pricey, but then so does everything when you’re watching the pennies.

‘Good to see you’re economising now we’re on our fifth pub of the day,’ remarked Roxy.

The Dolphin has a strident and slightly off-putting view of children in pubs. The door is emblazoned with their ‘Children must remain seated at all times’ policy. The door to the garden boldly states: ‘This is a garden for grown-ups’. While many customers appreciate a landlord’s insistence that children behave, it’s hard not to view the signage as unnecessarily hostile. Children haven’t remained seated since 1947. Surely ‘children must be supervised’ would have been sufficient? Most parents, I imagine, would simply go elsewhere, which The Dolphin insist is not their intention, in their policy explanation. Roxy, on the other hand, applauded their position and wished it went further into actual swearing.

Over the road, the Golden Lion has also put on some slap and a push-up bra. With six pumps, it’s also aiming for the ale drinker, though the choices didn’t excite. With one part of the bar given over to coffee and cake though, it clearly invites parents and their plus ones too. And with a Sunday carvery it’s going after carnivorous families from the 1970s as well.

The newest kid on the block, Beer Rebellion, manages to find a comfy niche not already covered by the Golden Lion, Dolphin, Pavilion, 161, Fox’s or Bricklayers. It’s in the micropub tradition, a converted retail space with an excellent ale selection, reasonably-priced, with a nice vibe, pop-up grub at the weekend, and is friendly and cool without being poncey. We did make the mistake of starting on the 5.6% Frosty Morning, which contributed to my crawling out the door on all fours before closing time.

One day Sydenham will welcome The Greyhound back to life, after the developer, Purelake, demolished it without permission. Hats off to Lewisham Council and local campaigners for forcing them to rebuild it brick by brick. And a big raspberry to Purelake for being brick shits.

I’ve always associated Sydenham with music, as back when I was a skinny, spotty kid, I used a rehearsal studio, Silversound, here, as did several other mod-type bands. Only a phenomenal lack of dedication and a dearth of talent kept us from troubling the charts.

Sydenham is the home of Hospital Records, the independent drum+bass label that’s been thriving for about 20 years now. And with United Sound of Sydenham, Dig A Little vinyl nights at Sugahill and Music Nights in Sydenham at On The Hoof, SE26 is hopping with dance music.

The nightclub Zanzibar is still going, despite having its licence reduced to 2am closing after complaints of fucking, fighting and jerk chicken with the previous 5am finish. Locals are not entirely chuffed to have it on their doorstep, though some feel the owner is doing his best to create something worthwhile.

And in a surprising career move, Alexander O’Neal played live at the Tudor Livesey Hall at the weekend.

Thankfully, we ate before going to Beer Rebellion or we may not have survived. Roxy had booked us a table at Trattoria Raffaele, ranked the fifth best restaurant in London on TripAdvisor. My suspicion was aroused on arrival.

The service from a pleasant, cheeky waitress was good but the food was only OK, confirming the feeling that it’s a place well-loved by its regulars, in a part of town with so little foodie competition, that its online rating has become skewed by local affection.

Sydenham is spoilt for parks. Sydenham Wells Park is delightful with its pond and nature reserve of exotic trees. And despite what Roxy says, the woods are dreamy – the perfect place for a ponder.

There’s more water to stare at in the River Pool Linear Park but one of my favourite spots was the lovely ‘brunch kitchen’ of the Brown & Green cafe in Mayow Park, with its outside seating and park view. I do like to see tower blocks overlooking a park. It’s nice to be reminded you’re in London and not in the country when you’re getting stoned. Otherwise, panic might set in.

Apart from W.G. Grace, Sydenham has had more than its fair share of notable residents, from John Logie Baird, one of television’s inventors, to the polar explorer Ernest Shackleton. It also counts as sometime-locals a Rolling Stone (Bill Wyman), an action man (Jason Statham) and a pin-up (Kelly Brook), as well as Aussie perv, Rolf Harris.

But apart from Harris, its least welcome guest has been the Beast of Sydenham, a panther that attacked a man and supposedly stalked the streets 10 years ago, bringing police armed with tasers to seal off roads. It was big, black and powerful, around the size of a labrador. It was also the colour of a black labrador, which begs the question, was it a labrador?

Deserter bro, Half-life, can attest to the efficacy of tasers in the face of wild animals as the taser is among the arsenal of weapons he keeps at home. A neighbour’s dog used to constantly bark at him through the letterbox until Half-life fired his taser at the door, electrifying the metal opening and sending the mutt shooting backwards, wimpering. He hasn’t heard a peep out of it since.

Sad news: Sydenham’s Beer Rebellion has closed down, despite being much-loved. However, a group of locals are trying finding a way to reopen it. If you’d like to get involved email matt@coalitionbrewing.co.uk.

Sydenham doesn’t take kindly to pubs closing down, as Purelake found out. The Greyhound has now been completely rebuilt and recently sold. Sydenham can expect it to reopen as a pub shortly in a huge victory for local boozy activism.

Forest with a Big Hill 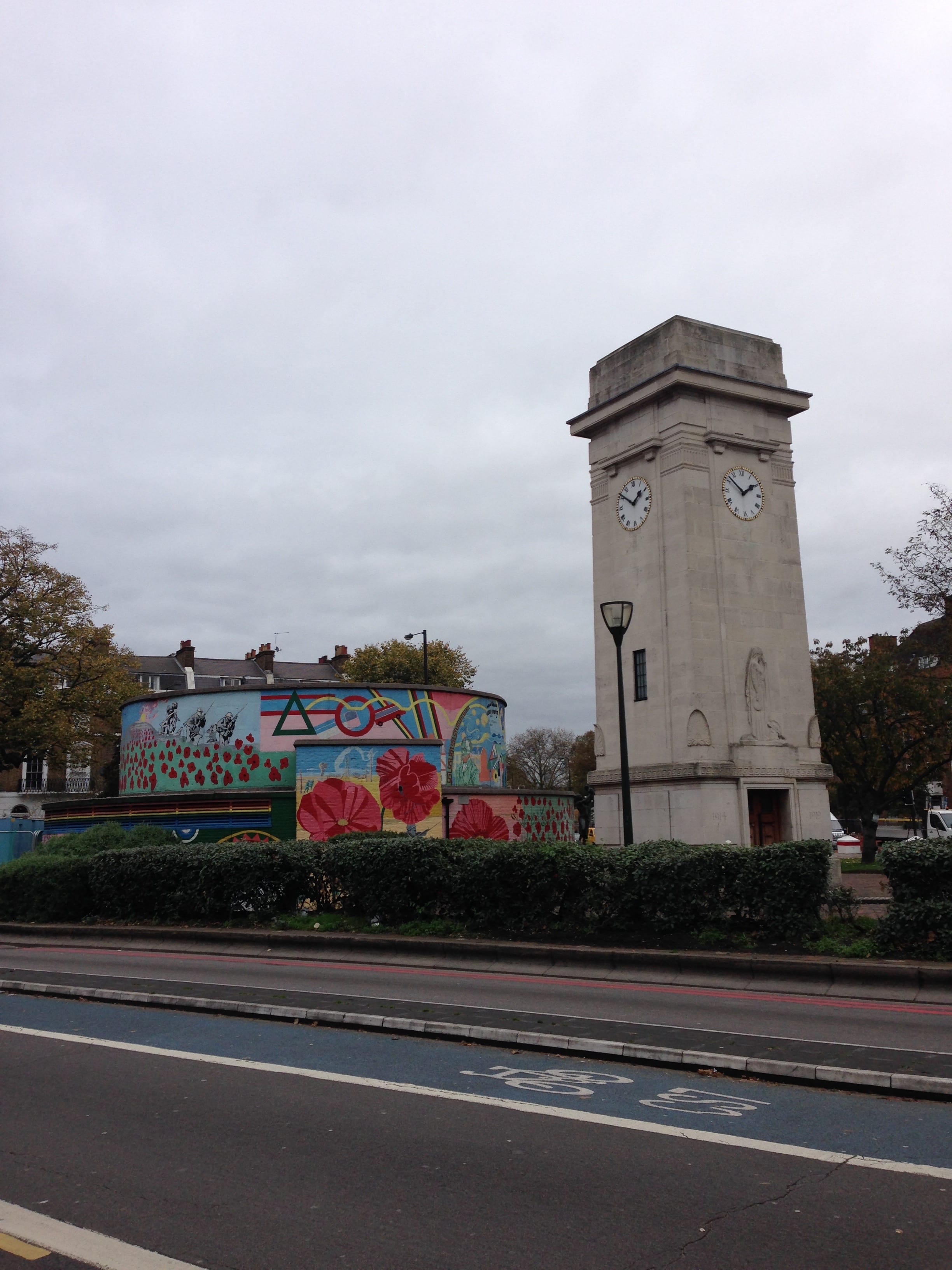 "There’s only one you.Which, let’s face it, is good thing."
13 hours ago
"RT @ldnloocodes: Hello. We'll be tweeting the codes for loos in various cafés around London as we get them. @ us with codes so we can retwe…"
16 hours ago
"@mralistairgreen cc @rvamarsh @PaulPawhitehead @oohrogerpalmer @chrispressley"
20 hours ago
"RT @typejunky: Lads, I’ve found an escape route. Who’s with me. https://t.co/ZLnGkXRR5f"
23 hours ago
"It's Friday. Bring out your baskets. https://t.co/i2m2Ta9vYm"
23 hours ago