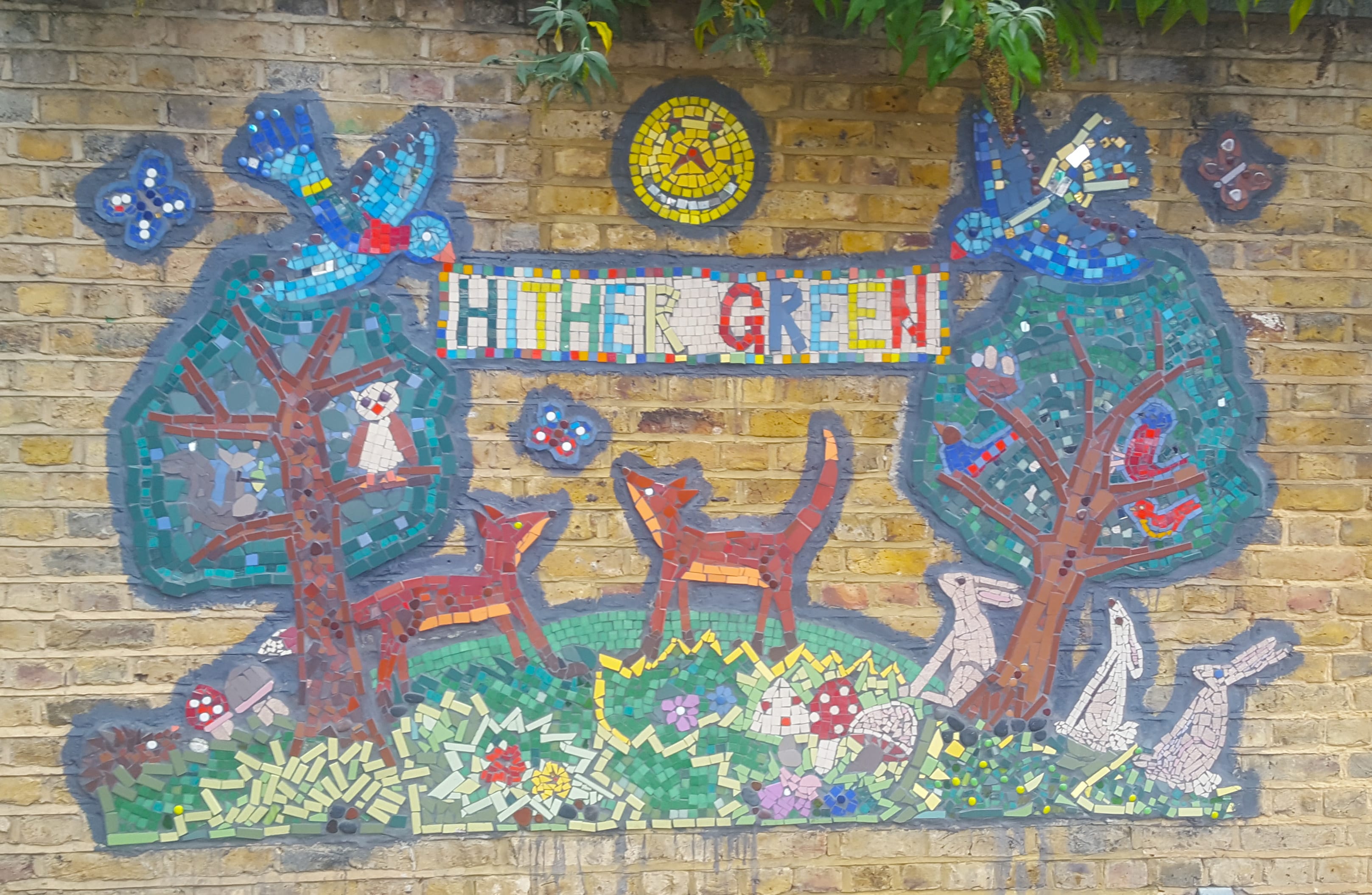 By horses, we mean, of course, pubs. If anything, the fewer horses in a town the better. Keep their massive arses on the telly, where they can brighten up an afternoon simply by winning us tons of money.

Some parts of town, through poor planning, a misplaced regard for temperance, or general shitness, only have one pub. Nightmare.

I imagine hell to have only one pub: One pub, perpetually proclaiming closing time.

So what happens when you’re trapped in a one pub town? It’s walking to those second, third and fourth pubs that keeps us Deserters so svelte, so trim, so sexy beast.

Apart from the fitness issues, might the lack of variety cause madness? Luckily we’re in London and options are never far, but sometimes you don’t fancy going further than up the road. So what happens when you’re barred? Or if that’s where your ex goes, luring ever younger, fitter and funnier lovers towards the futon of fun.

I spent four days exploring South-east London’s solo sanctuary zones, risking madness, fatness and sadness. Though before you nominate me for some sort of award, let’s not forget that every day I was going to a pub.

What surprised me in Hither Green was the village feel it has, despite being clustered around a huge train station. And, given the modesty of its reputation, how clear it was that the residents have big love for their Hither Green, one pub or not.

Hither Green is bisected by the railway, which probably stops it from growing too much commercially – no bad thing. It might have only one pub, The Station Hotel, but it’s mahoosive. It’s so big you can probably stay fit by taking your pint to the furthest corner of its bistro and bringing back the empty glass yourself, repeatedly.

It’s easy to see how the place has survived in difficult times for giant pubs. It’s 15 minutes from London Bridge and the combination of ten hand pumps and rooms upstairs is an alluring one.

What else is in Hither Green?

Apart from a community cinema and an annual festival, there are three really nice cafes: You Don’t Bring Me Flowers, which hosts a monthly wine club; Arlo & Moe, which is home to the (BYOB) South East Social; and Good Hope, an admirable enterprise in remembrance of Jimmy Mizen.

Then there’s Grow Kings, doubtless a thoroughly respectable business that can provide you with the means for a hydroponic farm to enhance nature’s bounty (and possibly smoke it).

There is big news on the HG horizon, however. All being well, there will soon be a bottle shop-cum-craft beer bar (that also sells fine chocolate). Until it’s signed and sealed though, there’ll be no dancing in the streets. Five Points, Siren, Four Pure, Beavertown, Cloudwater and Pressure Drop have been mentioned, so there’s a fair amount of limbering up. Our fingers are firmly crossed for this to come off for the good of all mankind.

The borders of Honor Oak are more elusive than most, so without wanting to get into a row, I’m going for the bit around the station, Honor Oak Park. The nearest pub is The Chandos, recently very smartly refurbed (as reported in our Pubcast #1). Luckily, Honor Oakers will never have to suffer the monotony of being in a one pub town, because they are surrounded by the fertile fields of boozy Brockley and fecund Forest Hill.

Having said that, The Chandos has reinvented itself with lovely craft beer and ace pizza, meaning you never have to leave, especially as they show the footy on a big screen. The beer range is extensive and we liked the staff, especially after seeing the familiar face of Sean (Shaun? Shawn? Shorn?), previously the bar manager at Dulwich Hamlet.

What else is in Honor Oak?

If The Chandos is in Honor Oak, then Babur, opposite, must be. A South London institution, Babur is also one of the finest and most creative Indian restaurants in London. Lamb shoulder, marinated for 100 hours and cooked in a spice-rich Punjabi masala? Hubba, hubba, hubba.

The tapas bar, Donde, is well thought of, and there are a few cafe/bars providing alternatives to the pub, should such a thing ever be required. A morning in Hop Scotch provided one of the life’s more pleasant cafe experiences. All the breakfast standards you’d expect, plus some interesting alternatives, good music, lovely staff and booze options that include enough spirits to enliven any morning.

Honor Oak, like HG, has a villagey feel, though more middle class. It also has the nature reserve of One Tree Hill, a perfect spot for a smoke-up once your butler has carried you up there. The view over London is fantastic – you can see all the way to the Ally Pally – and the place is replete with history, from Roman times to WWII. Two of our most significant female leaders had contrasting experiences here (with no apologies to Th*tcher and May). Queen Elizabeth I was said to have rested here en route to Lewisham and some believe it to be the site of Boudicca’s, the Celtic warrior queen’s, defeat by the Romans, after she’d caused them maximum agg.

It might have only one pub but we’d be happy to tarry around H.O.P

Its Heritage Trail is a slim one, beyond connections to the author and poet E Nesbit, but Grove Park’s one pub, the Baring Hall Hotel, is surely peak Antic. They’ve taken non-decoration to new levels here, doubtless putting off any thirsty plasterers in the area and offending the DIY-inclined. With its real fire and homely/dilapidated feel, it’s cosy, with a strong beer and food line-up. If you’re only going to have one pub, it might as well be magnificent, though the familiar 4pm opening time must be deeply frustrating, if not cruel, to locals.

What else is in Grove Park?

Sadly there’s not much more to report in Grove Park, a place which feels like suburbia spreading into South London rather than the other way round. Chinbrook Meadows is pleasant, with the River Quaggy continuing its mighty trickle, but Grove Park’s brush with glamour comes in the form of famous ex-residents: Former Archbishop, Desmond Tutu and Page 3 stunner, Keeley Hazell. We’re not sure they ever met, but if so, it must have been one hell of a party.

The epitome of a one horse town, Bellingham has very little to offer the visitor other than its run-down, but Grade II-listed pub, The Fellowship.

Only one of its bars is open and in between serving the sparse customers, the barmaid returns to the comfort of the gas fire on our side of the bar. The pub has received a lottery grant though to restore it to its former glory – and it’s no exaggeration to talk of ‘glory’.

The Fellowship was Henry Cooper’s local and where the much-loved boxer trained on way to becoming the only South Londoner to put The Greatest on his arse, albeit on the way to defeat.

Among The Fellowship’s now unimaginable history are gigs by the likes of Fleetwood Mac and its status as a key mod venue. The pub’s decline is terribly sad and possibly linked to more violent times when you had to be a bit tasty to enjoy music. We can only hope that its revival will rejuvenate a tired old area.

What else is in Bellingham?

Nowt. Bellingham is essentially a post-WWI housing estate, built as ‘homes fit for heroes’, to improve the poor health of working class Britons. It was built at a time when housing was a national responsibility, not a business opportunity for anyone with the readies. The pub was established to serve the estate and became what was known as an ‘improved’ public house – one with facilities for the community; a games room, music hall and a children’s room. It was a social experiment that served tea and coffee as well as hooch. It has been listed because it is a rare, virtually unaltered example of the 1920s ‘improved’ pub – if a pub is a thing that can ever be improved on.

The Bellingham Estate, along with other LCC Cottage Estates, was a solution to a housing crisis and a forgotten blueprint for the future. Like Thamesmead, built 40 years later, it’s a reminder that the future is rarely what you think will be.

Plans for The Fellowship’s restoration include a microbrewery and cinema, both desperately welcome, along with the 40 jobs the project will provide. The Fellowship has been saved because it’s never been updated and could once more be the community pub it was built to be. Hope, as ever, lies in the pub.

More on One Horse Towns in this pubcast:

Publove: The Fellowship and Star

Love and Death in West Dulwich